Incredible Tiny House Cafe Is A True Work Of Art

Posted by Robert Shapiro at 6:47 PM No comments: Links to this post 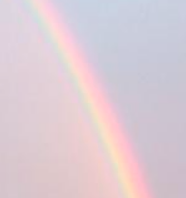 I was visiting friends and family years ago in northern California and went for a walk just to explore the neighborhood. On my walk I happened to look across the street towards a sidewalk a little bit at a distance because I could see that it was raining very lightly there and the rain appeared to be moving slowly in my direction.

I saw suddenly a rainbow which had just appeared there and it was very bright. I stopped to appreciate its beauty.

What a wondrous experience I thought. I wished it could be me but I was so happy for him. I just wanted to share that because it was such a marvelous sight. May you have such beauty in your life. Goodlife to you all.
Posted by Robert Shapiro at 8:18 PM 6 comments: Links to this post

Robert Shapiro
Robert is known as a Shaman, Mystical Man and Professional Trance Channel for over 35 years. More than 40 of his books have been published so far. For more see Robert's YouTube: https://www.youtube.com/BenevolentMagic and a list of his books: https://www.lighttechnology.com/authors/shapiro-robert